A startup based in Colorado, United States, is developing a green alternative to the highly polluting traditional cement by replacing limestone, its primary material, with less-emitting rocks, revolutionizing the formula without negatively impacting the industry.

“We want the resulting concrete to look, feel, and perform just like familiar everyday concrete,” says Bill Yearsley, President, and Chief Executive Officer at Terra CO2. “The goal is to swap out the cement component, lower the environmental impact, and still use all the same mixing equipment, trucks, and infrastructure used by concrete today.”

The process involves replacing the limestone-based glue with silicate rocks dug up in aggregate mines. Ground rocks are then heated to become a powder of tiny glass spheres. The result is called supplementary cementitious material – or SCM – that can be added to the cement formula. By replacing 20% of the cement in blends, it could be possible to save six million metric tons of emissions each year. Other alternatives are currently in development, including bio-cement made with microbes, and concrete capable of capturing carbon dioxide. 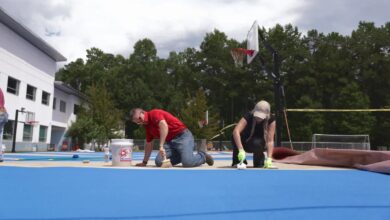 This School Is Safer and Cooler, Thanks to Sun-Reflecting Paint